Lancer imagines a future where a survivor humanity has spread to the stars after weathering terrible ecological collapse on Earth - the end of the Anthropocene as a consequence of unrestrained consumption and poor stewardship. Five thousand years later, humanity lives in the wake of a desperate revolution, one where the victorious radicals now manage the galaxy they've won.

The setting features a mix of gritty, mud-and-lasers military science fiction and mythic science fantasy, where  conscript pilots mix ranks with flying aces, mercenary guns-for-hire brawl with secretive corpro-state agents, and relativistic paladins cross thermal lances with causality-breaking, unknowable beings. Lancer's galaxy is one where utopia exists, but is under threat, and the struggle is not yet entirely won; the revolution is not yet done.

In Lancer, players adopt the roles of mechanized chassis pilots - mech pilots - comrades together in a galaxy of danger and hope. Some groups will fight to rectify the crimes of previous administrations; others will fight for their nation,  pieces in a greater game of hegemony. Others will carry the banner of a corpro-state or mercenary company, working to advance private interests while lining their pockets. Others still will fight for groups acting in opposition to those in power - for the underground, for the forgotten, agents of entropy and agents of yet more radical revolutions.

Lancer offers deep, modular mech customization, a wide range of player backgrounds and hooks to prompt storytelling, and a system and setting with room for any narrative you and your group want to tell. It’s best with a group of 3-5 players, and can be used to run a one-shot session or persistent campaign.

Included with the free PDF of the Lancer Core Book re all the core rules, mechs, and character options - everything you need to learn LANCER and build a character. Not included is the NPC creation, GM section, and setting info - but everything in this version of the core book is otherwise the exact same (art and all) as the main book.

To open up new avenues for play, be sure to join our fan-run Discord server, and to download a free copy of Comp/Con, Lancer's companion character-builder and compendium app.

Lancer is a project by Massif Press, an indie publisher run by Tom Parkinson Morgan, author of Kill Six Billion Demons, and Miguel Lopez.  Massif is based out of Atlanta, GA, and Portland, OR.  For the latest Lancer news, be sure to follow Massif Press on Twitter.

Nowhere to go but up, pilots.

Whats the difference between this free version and the paid one?

Paid one has NPC data. Aka "monster manual"

Do the bonuses a mech receives from mech skills increase when leveling up or are they fixed at the time of the mech's creation?

Do you mean the mech skills associated with the pilot (HASE)? You add +1 to a mech skill every time you gain a license level, per the "Leveling Up" section on p. 18.

I mean the mech improvements derived from the skills (page 34). RAW it seems that you have to fabricated a new frame each time you level up in order for these new bonuses to apply.

That's never come up in my games because leveling is always done during downtime when players have access to fabrication between missions to reconfigure their mechs. I would suggest if you end up with a situation where they don't have access to printers but may find parts and upgrades some other way (which it suggests is rare but can happen on page 43), I'd probably let the players apply apply their bonuses by "reconfiguring" the existing frame just to let those bonuses keep up with other upgrades.

Would it be possible for the Character Sheet PDF to be made interactive? I understand COMP/CON exists, but I would personally prefer to have a offline option..

Shame that the officially endorsed Discord-community seems to be such a cess pool. Really took interest away from buying the game -_-

Literally the opposite is true! I have found nothing but an open-minded, helpful community of like-minded enthusiasts to theorycraft with. I literally cannot fathom how you could have anything but such an enjoyable experience.

It's a nightmare, it's so enforced that it becomes artificial and overbearing.

Lancer RPG seems to be a great game. This first book is impressive.

I'm looking for a character sheet for Lancer RPG.

Is it available somewhere?

Search for Comp/Con. It's a program that is a mobile character sheet for your pilot and mech.

Yep. It too is listed on Massif's itch.io page, same as this product.

There's also a character sheet PDF released an hour ago on both the free and paid versions of the Core Book product pages :) 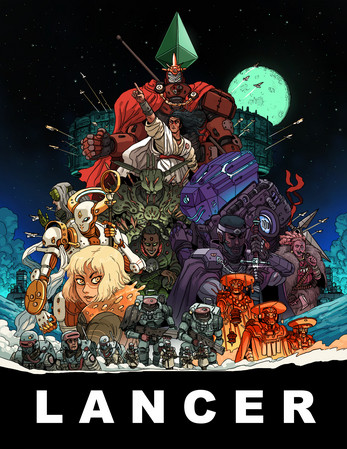