The deck rumbles beneath your feet, and for the first time you hear the howl of windshear as the shuttle breaches Hercynia’s thick atmosphere. The world below, seen through the a thick, condensation-streaked porthole: A smear of forest, scarred by ragged patches of black and brown. Patches of grey cloud cover speak to the months-long rainstorms that plague the planet's surface.

Welcome to Hercynia, the location of Lancer's first narrative campaign.

Hercynia is where it all began - the proving ground and birthplace of the mech, the spark that ignited the revolution that overturned the galactic order. It was here that humankind encountered alien life and exterminated it for good.

With its history now long forgotten, the planet has seen a new focus as a colony project. Development on the emerald planet has been quiet and orderly so far, but when the characters receive a call for aid from the brand new colony, they may be getting more than they bargained for.

Contained in this book is a structured narrative campaign intended for newer players of Lancer that will take characters on a journey to save the inhabitants of Hercynia from certain destruction at the hands of an implacable, ancient force.

This book takes characters from License Level 0 to 5 and has a full complement of story beats, battles, and narrative choices for characters to make.

Additionally, this book adds a wealth of new options, gear, and NPCs for players and GMs alike to explore:

Hercynia has more than its fair share of ghosts, and it's history is far from buried. Go forth, and tell us what you see.

The .lcp files included contain all the player facing content for COMP/CON, our free character builder tool, and will remain free to download (see the 'demo' file below). GM-side COMP/CON NPC data is available with purchase of the PDF.

In order to download this game you must purchase it at or above the minimum price of $25 USD. You will get access to the following files:

We could not figure out how to get Exotic gear onto player frames. I ended up having to edit the .lcp to remove the Exotic tag just for it to show up in the equipment screen. Is there a different, intended way to give that equipment to players that doesn't require editing the .lcp?

Hey there! Exotic gear needs to first be added as a reserve on the 'Tactical Profile' section of the pilot sheet before it can be added to a mech. Cheers!

I was wondering if there was an estimate anyone could give me on how long this campaign is. I know that it is supposed to take you to LL-5, but what does that mean as far as sessions? Based on what I remember from my readthrough of the core rulebook, that should be 5-10 sessions, approximately. Is that correct?
I'm trying to plan a mini-campaign between two major campaigns I'm running, and don't know if this would be a good fit.

I'd say 10 sessions minimum, and that's if you blitz through all the scene setting and narrative and focus just on combat. 15 sessions may be more realistic.

On Page 102 the combat lists scouts as having weakness analyzer. Is this the Specter feature or is it meant to be the Scout feature Expose Weakness?

Is there no Comp//Con data for the Eidolons?

Not yet, I'm working on overhauling the whole GM/NPC side of the app, and when finished it'll include an Eidolon builder

Wallflower Part 1 received an errata update on 2021-05-17. The Enkidu and Swallowtail got some balance adjustments, and many typoes were fixed.

You can view the complete changelog here: https://github.com/RancidRance/Wallflower-Part-1-Release-Typos-and-Errors/issues...

If you have typos to report, please post them to the issue tracker here so we can have them all in one place and don't duplicate any reports.

There'll be more acts? at the same prize?

Wallflower will have two Acts total. I can't guarantee anything on price, but it will likely be the same.

>  As spoiler free as I can make it, Act 1 is it's own campaign with begining middle and end that will take you from LL0-5. Act 2 instead of taking the ending of act 1 goes down another path to continue the story.

> You don't need to own both to get a complete product or campaign, they just connect to one another.

Suggestion: The LCP Data has some spoilers for the Campaign. It would be better to have 5 files, one for each Mission.

The next C/C update will include a pilot-side exotics manager and a (default on) option to hide exotics from the compendium. You'll still be on the honor system in a sense, but players won't spoil content by accident

On page 67, Regret's Chain Axe damage is listed as 3, but it should be 7 as per Core Rules.

I can't find the Sting Rifle. Is it in there?

It's page 50 in the book. I don't think any exotic gear is in Comp/Con yet. Last I heard the guy that does Comp/Con was working on an update that'd make exotic gear easier to put in.

Thanks for the heads up!

bought this mostly for the Eidolon feature (I’m already running a campaign I wrote) and I was NOT disappointed. Worth the sticker price for that alone. Massif continues to impress!

I am loving and devouring the setup, the story and the additional rules, but, for such a tactical game with such gorgeous illustrations, and considering the times we are living in, I am a bit disappointed that no combat maps are provided.

Is there ever a plan to release that type of GM aid?

I dunno if there's anything official coming soon, considering they would already be working on stuff like more supplements and Act 2, but there are people currently making maps on the discord server who I'm sure would happily share them when they're done.

Well, page 54 explicitly references a map that isn't there :/

I don't think it's supposed to be referencing a pre-built map. Just pointing out that there should be areas of Difficult and Dangerous terrain on the map you make, and what is different about that terrain than normal. It is worded a little weird though, could definitely have been more clear.

Oh, I guess that makes sense. Thanks.

Page 24 Right Column Paragraph 1 "about the Hercynians, the Egregorians, or the distant cities that the PCs will encounter later acts" is missing the word in.

Page 56 Textbox for Symptoms, option 17-20 the first sentence is "You've been seen places where you haven't been"

Act 1? Is that the full campaign or just the first book?

As spoiler free as I can make it, Act 1 is it's own campaign with begining middle and end that will take you from LL0-5. Act 2 instead of taking the ending of act 1 goes down another path to continue the story.

You don't need to own both to get a complete product or campaign, they just connect to one another.

Fantastic book, one of the campaign books I've been most excited about running ever, one issue i noticed was one of the listed pieces of exotic gear appears to be missing, the "wolf-spider drone" from mission 5.

It's missing from the LCP as well.

I am so excited for this release, the book I've waited for more than anything in years.

oops, Patience gets misgendered on page 44 and 45 in their dialogue samples

Also, on the "spoiler-free" map PDF, the circle/dot on the map for the location near Mt. Cooper is still visible, even though the label has been (correctly) removed. I assume the circle/dot for that location should be removed as well, as it has been for the other locations whose labels have been removed from the spoiler-free version of the map.

(Interestingly, the spoiler-free map on the last page of the adventure PDF itself is already correct; the circle/dot for that location has been removed in the map there.)

Very minor typo in the product description: "it's history" should be "its history". 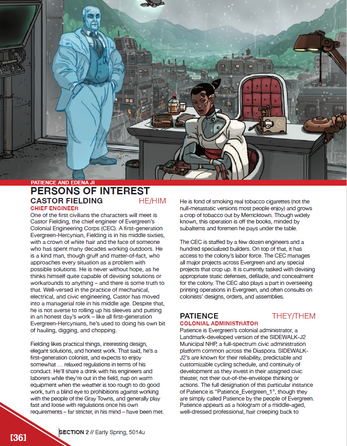 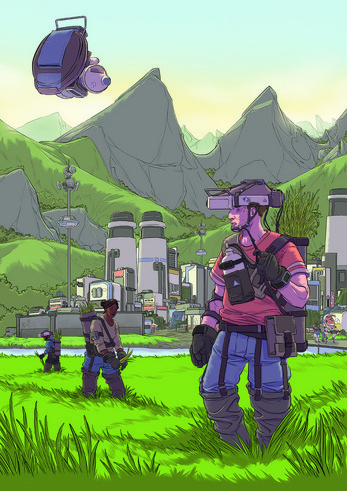 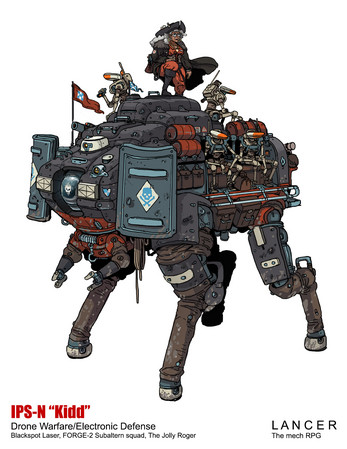