(Note: This text is pre-release draft material. While the major themes, concepts, locations, and broad narrative/setting strokes will remain largely intact upon publication, expect the revision process to make some changes!)

In winter, the rest-time for the Four Lands, PASSACAGLIA and their band did venture to KARAKIZ, the ancient city of GODBIRTH. There they sought the tyrant of KARAKIZ, a great warrior named BALTAGJI.

The road was long and desperate, and many did die as their armor did naught to warm them, and their cloth was thin and torn, and their bellies were empty. All nights were cold and deep, but PASSACAGLIA was of good cheer, and his captains did lend them their heat as PASSACAGLIA had shared it with them, as was wanted.

It was on a cold and bitter night like this that PASSACAGLIA saw a ghost-light bobbing in the falling snow. “Do not chase it,” one loyal captain urged PASSACAGLIA. “It is a ghost-light, to bewitch travelers. In summer it leads to death -- surely it begets the same in winter, if not worse.”

But PASSACAGLIA, always of good cheer (for they already took their fill of suffering under the Pasha, and grief was their name after ten-and-three of their brothers had died) took up their spear TUI and said to their beloved captain “Take heart, o Captain. I am only a humble farm-boy, and you a strong soldier. If I fall, you will take up my name, and carry my dream in your breast farther than I.”

And PASSACAGLIA left, and chased the ghost-light through the howling snow, and came to a small ruin of a home where the ghost-light was trapped. “Little ember,” PASSACAGLIA called to the light. “Why have you led me here? What message do you carry for my ears?”

And from a deeper shadow yet in the home, a voice issued, saying “Do not seek out the speaker of this voice. Listen only to my words, and make no movement, and when I am done you will be guided back to your camp. I am ORACLE, and I have seen the end of all stories. You are called PASSACAGLIA, and your name will never be uttered in darkness. Before you lies a thousand years of empire, yours if you continue along your path. But know this: to continue will only feed a terrible wheel, whose name is DIS, and whose appetite is vast as the star-lit sky. Will you continue?”

PASSACAGLIA, without hesitation, said to the ORACLE, “Yes. Pasha has doomed my mothers and killed my brothers. I must continue. Why will this turn your terrible wheel?”

And the ORACLE said, “Your Empire would be built at the tip of a spear. Your fields watered with arrows, and then bullets, and then coherent particles. You would build a monument to your brothers, and to your mothers, and you would form it from the ash and bone of the brothers and mothers of your enemies, and hear only the cheers of your people, and not the cries of the children of those innumerable dead. This, PASSACAGLIA, is the fuel for the wheel that consumes the empires made by brave young heroes like you.”

This ponderous whinging curdled PASSACAGLIA’s fair features into a terrible mask of hate, and so storming into the back of the small house they found the ORACLE there, a creature wrapped in rags. PASSACAGLIA threatened the ORACLE with TUI at its neck and said, “Speak no more, ORACLE, but to beg for mercy! You do not know the life I have suffered, you have not heard the cries of my brothers, or the wailing of my mothers, nor the hope my words bring to those who have suffered as I have!”

And the ORACLE, laughing, said, “Do you think I fear death, PASSACAGLIA? I, who have seen the great wheel DIS grind across my own sky and gave it name? I, who have heard countless times those very words spoken from mouths like yours? I, who has lived and who has died? I, who has gained this knowledge and many other secret ones?”

So PASSACAGLIA stabbed the ORACLE through the throat with TUI, and the ORACLE laughed and said, “You are braver than most, PASSACAGLIA, and fool who must learn. Go, build your empire. I will meet you again at the end.”

And the ORACLE died, though there was no blood, and when PASSACAGLIA tore off the creature’s robes they found not a man,  but a golem in the shape of a man, made of like-skin, with black blood and green blood, and many ghost-lights blinking where its eyes should be.

PASSACAGLIA took the ORACLE’s cloak, finding it a fine and sturdy thing, and left their spear TUI, and returned to their camp. There, PASSACAGLIA took comfort in their captains, and forgot the words of the ORACLE, and continued to KARAKIZ, where they would build their empire. 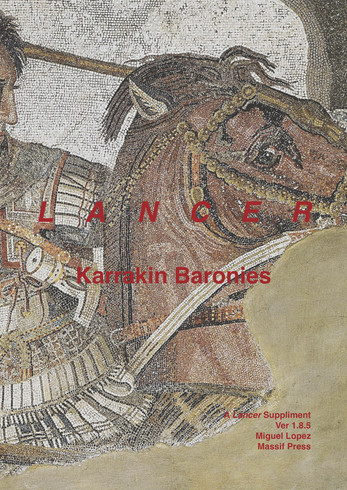